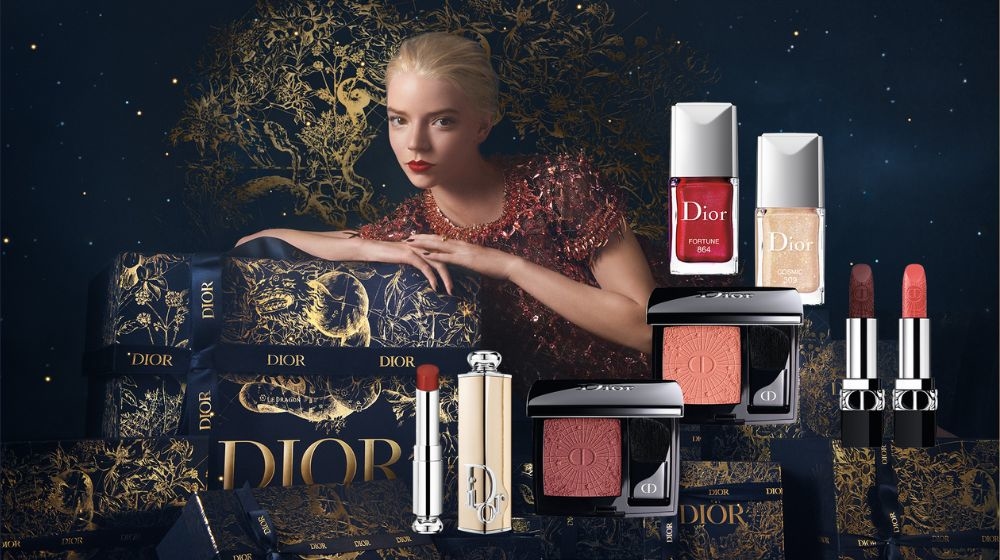 A holiday dream transports us to the Château de La Colle Noire on a starlit winter’s night.

“La Colle Noire was Christian Dior’s home away from Paris, and it feels like a magical place laden with memories,” explains Peter Philips, Creative and Image Director for Dior Makeup. “This enchanting place beneath the heavenly skies provides the setting for the Holiday 2022 collection.” A fairy-tale studded with golden notes pays tribute to one of the iconic House’s colors, gold, which in French (L’or) lies at the very heart of the name Dior. Reinterpreted by Pietro Ruffo, constellations of stars light up the gardens at the Château de La Colle Noire, decorating the glim-mering creations of this collection. For this holiday season, Peter Philips reveals a beauty look as radiant as the stars, that nothing can eclipse. Lending her face to the Holiday campaign, Anya Taylor-Joy shines among the stars, bringing another dimension to this phantasmagorical night.

Look to the stars

Isn’t everything that glitters Dior? This season, the two 5 Couleurs Couture limited edition palettes shine thanks to their opulent hues, their rich textures and their constellation patterns evoking the enchantment of a starlit winter sky. Glimmering as cool as the moon, the 5 Couleurs Couture Galactic showcases around a pearly white: a rosewood, a silvery lavender, a velvet black with a touch of iridescent platinum, and a mysterious burgundy. Enriched with a multitude of iridescence, the 5 Couleurs Couture Cosmic Eyes reveals a warmer palette around a satiny champagne beige: a soft bronze with a green undertone, a golden shade really couture, a velvety black spiked with gold, and a silvery taupe. These color harmonies were designed to create the holiday look of your choosing, be that a subtle sprinkle of luminous stardust, or a more sophisticated, cosmic sparkle.

A limited edition of Rouge Dior reveals a bullet engraved with a delicate constellation like a map of the nightly sky, created by Italian artist Pietro Ruffo. These couture lipsticks with long-wear formulas, infused with floral lip care, were created in four shades by Peter Philips: Enchanted Pink, a satiny coral pink, Midnight Rose, a spellbinding rosewood, Mystic Plum, a mysterious matte plum and the legendary Rouge 999 red with a velvet finish.

For the most beautiful holiday season, Rouge Dior dresses itself in the most desirable makeup minaudiere. Its pure lines lacquered in intense black pay tribute to one of the iconic House’s colors, particularly appreciated by Christian Dior. This precious case conceals the flamboyant colors of the three Rouge Dior refills and is accessorized with a lipstick holder housing the refillable case.

With its luscious texture and intense colors, Dior Addict puts its vinyl-like shine formula to work with four new shades. “The Dior Addict formula is really exceptional and gives a very pretty makeup result,” confirms Peter Philips. “It is gourmand, and glides on to apply a very
fine film that provides coverage and blends with your smile. I created these more organic shades aimed for every skin, and even the most intense hues are easy to make your own.”
In its fashion case with golden mirror reflections for this limited edition*, Dior Addict is available in Cosmic Pink, a rosewood, Rose Fortune, an intense rosy taupe, Zodiac Red, a brick red, and Plum Eclipse, an intense plum.

At the heart of this universe lies Rouge Blush, with an ultra-pigmented formula and long-wear finish decorated with constellations. It ventures towards a radiant and festive Cosmic Coral, and a golden gleaming deep burgundy in Galactic Red, to build as desired, for a subtle or stand-out finish.

The signature of this collection, Dior Vernis honours vibrant new shades, with a spectacular taupe aubergine with an iridescent shimmer that catches the light, and a faux-classic red with a deep purple iridescent heart. To add a starry touch to your manicure, the Cosmic top coat applies an ultra-shiny golden milky way strewn with iridescent touches that form constellations on bare nails. Different sized mother of pearl particles in blue, deep purple and pink enhance subtly the nail polishes. 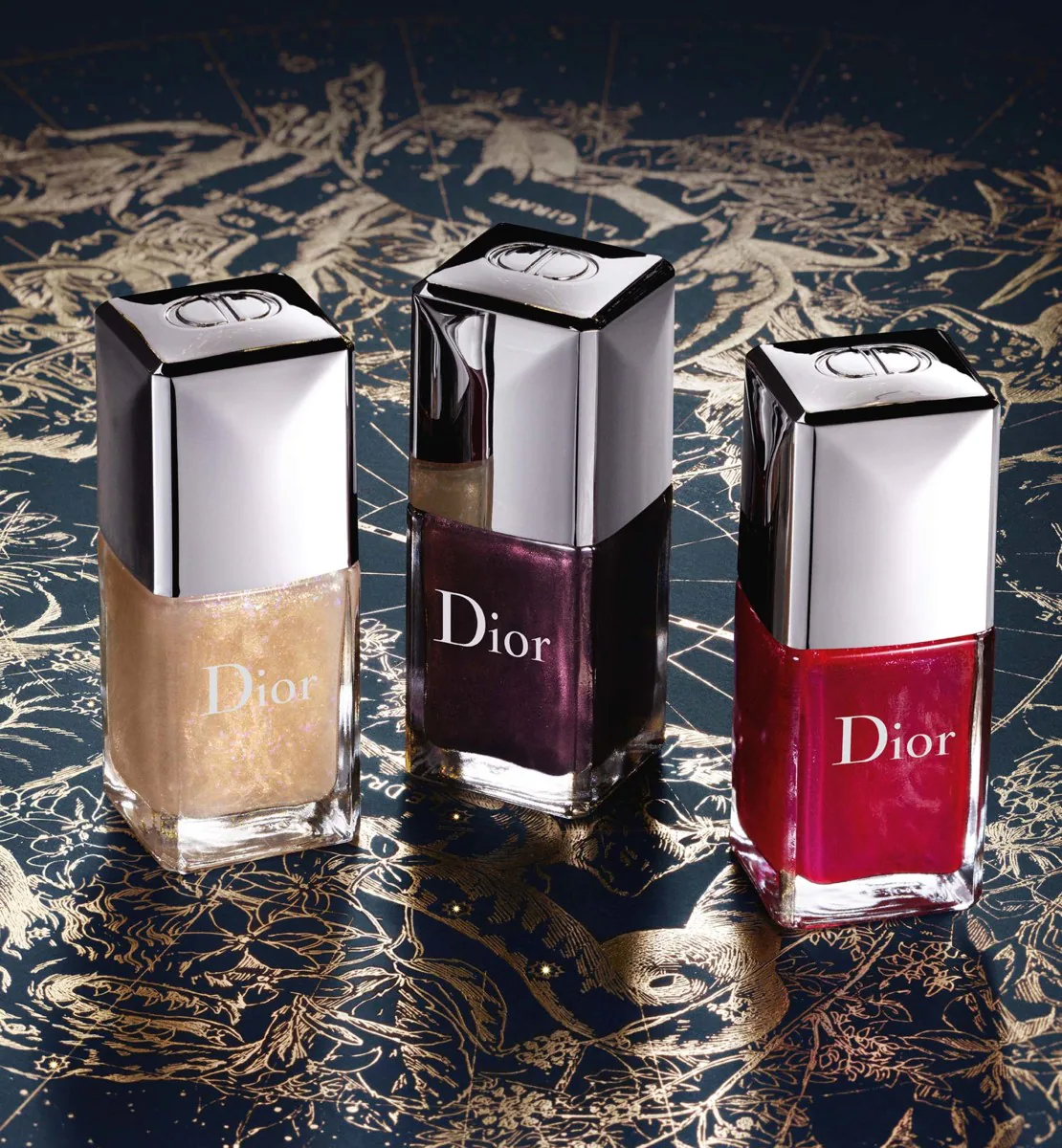 From rising star to enchanted magical charm… With her extraordinary screen presence, her spectacular red carpet looks and her way of revolutionizing beauty conventions, Anya Taylor-Joy is the very embodiment of the modern Dior woman. She radiates with luminous femininity and draws us into a poetic universe celebrating the makeup magic of the holiday season.
As the muse for this holiday collection, the actress sublimated by Peter Philips, opens the doors of La Colle Noire during the campaign.

In front of Benoît Delhomme’s camera, Anya Taylor-Joy is transformed into the host of a fantastic night in the grounds of Christian Dior’s château, which “metamorphose” into an extraordinary garden peopled with imaginary creatures evoking the constellations. 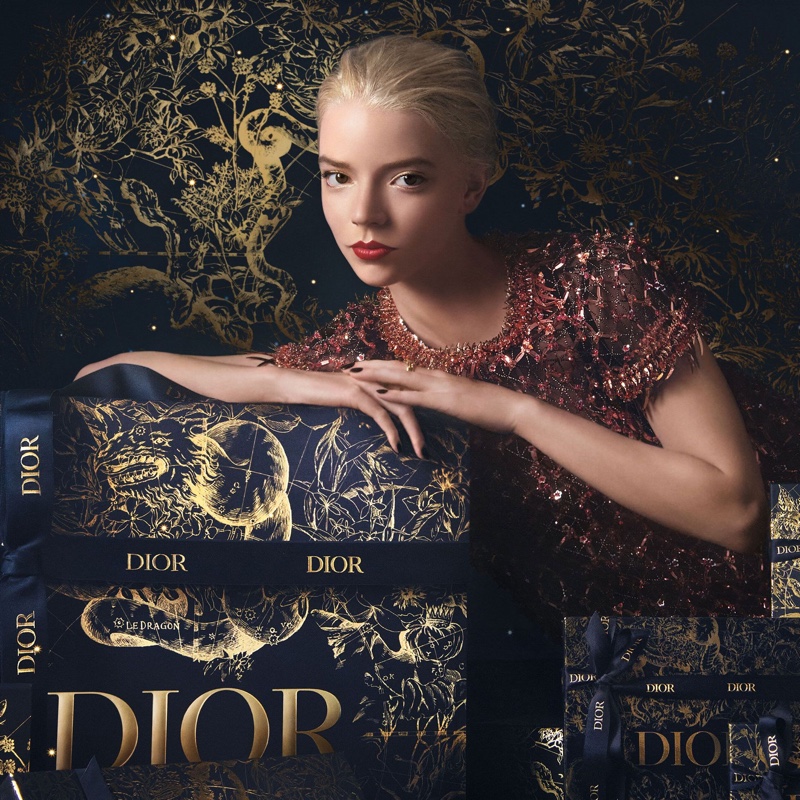 The makeup campaign images by Elena Kechicheva capture this almost surreal atmosphere where all eyes converge on the star with the remarkable, divine aura.

“In the midst of this magical night, Anya is a star,” recounts Peter Philips. “She possesses an eternal beauty and yet also radiates impressive strength. This is reflected in the campaign, her face made up with a subtle play on shadow and gold, which makes her red lips stand out.” 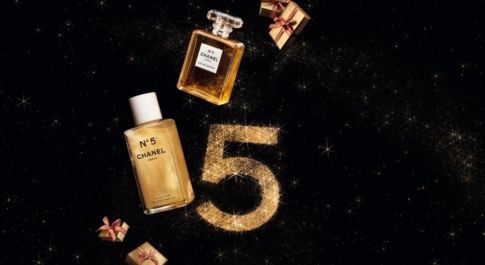 Ask for the Moon. Leave your mark on it. And celebrate the holidays in a swirl of stars.

The new season's make up collection.

The newest collection of fragance by the house.
COMMENTS
Leave a comment